In Immersive Design the idea of holograms appears again and again. And they become more and more popular for events. But actually “Hologram” became a pretty vague term under which a lot of different effects are placed. It is not even clear that we could say that real Holograms exist. Let me clear a few things up.

You have probably seen a couple of them, maybe in real life or on video. The hologram of the rapper Tupac and the appearence of Michael Jackson on stage as a Hologram made a big media spectacle. This effect was actually an illustion trick known for century. As there are so many ways of getting to a holographic effect. Let’s go over some of them

Le’s start with Tupac and Michael Jackson. This effect is called Peppers ghost. It is the same effect you can find in disney lands haunted mansion. What the audience sees is a reflection of a person on a pane of glass. The person is out of sight from the audience. The scene and the pane of glass is illuminated in a way that the glass cannot be seen. So only the reflection of the person on the glass is visible. The effect is the image of a ghost or a hologram.

Projection with Holo Gauze: probably the most popular form used on stage design, because it is pretty easy to obtain. Here a fabric, that is simultanously transparant and metallic/reflective called “Holo Gauze” gets projected (standard beamers can do) with the motives that should appear as Holograms. Especially from a far this gives a really nice effect. The holograms in the first two pictures above are obtained in that way.

Holo fan: This is more a gadget. On the right you can see the fan in action above and below turned of. The fans transmit light in a certain patter and when the fan moves really fast, the hard parts cannot be seen by eye. But the transmitted light can be seen, giving the illusion that only the light image is in front of you. All kinds of images can be made visible that way. 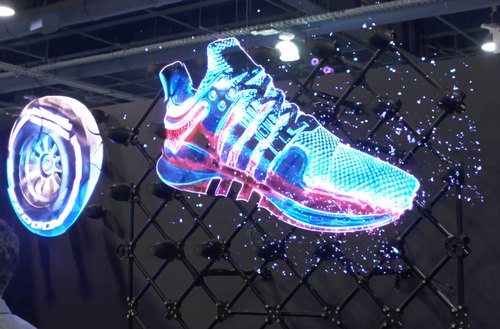 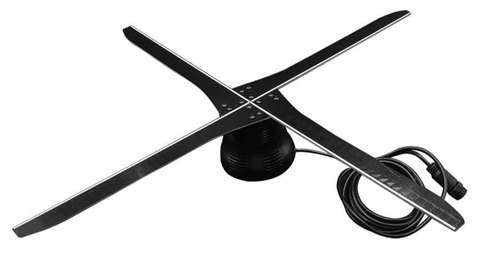 On the left you can see two other hologram technologies. These are build devices that can already been bought at the approbiate websites. Voxon is a start up that uses fast moving displays to obtain a 3d image in space (so a little bit like the fast moving fans but now in 3 dimension). The holo object is under a dome. Then there is another company called Looking Glass Factory. They build 3d monitors by using light field technology.
Another start-up that wants to build 3d monitors using light field technology is lightfieldlab although there are no devices available yet. But the whole light field technology will be very interesting and appears promising in the development of volumetric displays in the future.

So summing up, what you might have seen as holograms in the real world are not really holograms, they are illusions probably produced by projection. But this is what people especially in the show industry mean when they talk about holograms. And they do give a really nice effect.
Real holograms are currently only found in labs.

So let’s get a little more scientific. In the last couple of years there has been done some interesing research in coming even closer to constructing a 3d object in space.  In 2018 (doi:10.1038/nature25176) a paper was pubished in which Holograms were constructed by using laser beams that hold small nano particles in space (photophoretic optical trapping). These particles are then illuminated by light. This gives a freely visible object in space that can be looked at from every angle. It will be exiting to see how the research will go on in the future because this is probable the closest that we can get to real holograms.

Comment by a physicist: A Hologram is actually very clearly defined in physics. It is 3 dimensional information stored on a 2d image. The 3d object can be reconstructed by the information on the 2d surface. By illuminating a 3d object with a laserbeam (you first need to split the beam) and reflecting the beam on a photoplate the interference pattern of the laser beam and with this the depth information of the object gets written on the photoplate. These photoplates have a special coating and are transparent. After the holo photograph is developted (special chemicals but similar to normal photochemisty) the 3d image can be reconstructed by illuminating the photoplate with the same laser with which the photo has been made. The photoplate looks now like a window through which one can see the 3d object floating in space. Unfortunately I cannot find a single good image on the internet, it is hard to transmit how it looks like, its pretty awsome.