360° is not Virtual Reality, there is some confusion going on. 360° is an indepentent and exciting medium of its own. 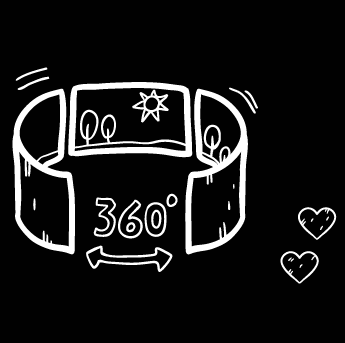 A 360°-Film is a full dome movie which completely immerses the movie-goer. A head-mounted display is worn enabling the observer to look in every direction he or she wants. 360 movies are pre-rendered in contrast to VR, which means there is no interaction of the observer with the video (of course, hybrids are possible). The action and the story take place around the observer, so that he or she is always in the middle of the event.

Bluntly said, a 360° is made like a „normal“ movie, with actors and camera and so on. To film it, a 360° camera is needed which is placed in the middle of the scene. Yet, when it comes to filmmaking, most principles which apply to traditional filmmaking do not apply to 360°. One of the main jobs of a filmmaker is to direct the attention of the audience, but this is taken away. In 360° the observer can look around wherever he wants to look. This has a huge impact on storytelling. The whole approach of storytelling in 360° is completely different and as it still is a new medium in its infancy the possibilities are currently vividly explored.

360° videos are very accessible as they can also be watched on any desktop on video platforms such as YouTube or Vimeo. When it is a 360° movie you can see arrows in the corners, and you can use your mouse to drag the view around. When you watch these videos on your smartphone, you should sit in a revolving chair. When you turn around, the view in the video also turns. Try it with some of the videos on the right.

Some videos to check out