Art and science are often considered as opposing elements, as if they would contradict each other. The one emotional the other rational. A never ending battle between forces.

I think quite the opposite is true. Fundamentally they do the same thing – they question reality. Science the physical world we inhibit and art the socital. They show us that our perception is limited and therefore reality is full of wrong conclusions, preassumptions that have never been tested and inquired. They go hand in hand.

Art and science are at the frontier of the unknown, they both conquer and explore. Our society is build on both of them, only one of them would not be enough.

The wonderful saying “more audacious than exploring the unknown is to question the already known” should be the call for both disciplines.

The really big paradigm shifts in science were always when the known was completely rethought. Quantum Physics disruptured everything that was until then known about submolecular particles and General Relativity deconstructed all assumptions about gravity and space so far. Those ingenious scientist that lead the way had to suspend all they had learnt about those fields otherwise they could not have the freedom and clearity to see through all the smoke of wrong assumptions and perceive the light of something different, new and truer. There is audacity involved, freedom and the detachment of what others may think.

The same is true about every artist, be that a poet, a filmmaker, an architect, a painter, a musician. To explore new paths, to criticize the ways walked before and realizing that what we have done so far can be done differently and better and should be.

Those revolutions that happen in science and art inevidibly dribble down into society and technology, they change the shape of our civiliazation.

There is an intricate relationship that was pointed out by Neri Oxman in a concept she called “Krebs Cycle of Creativity”: 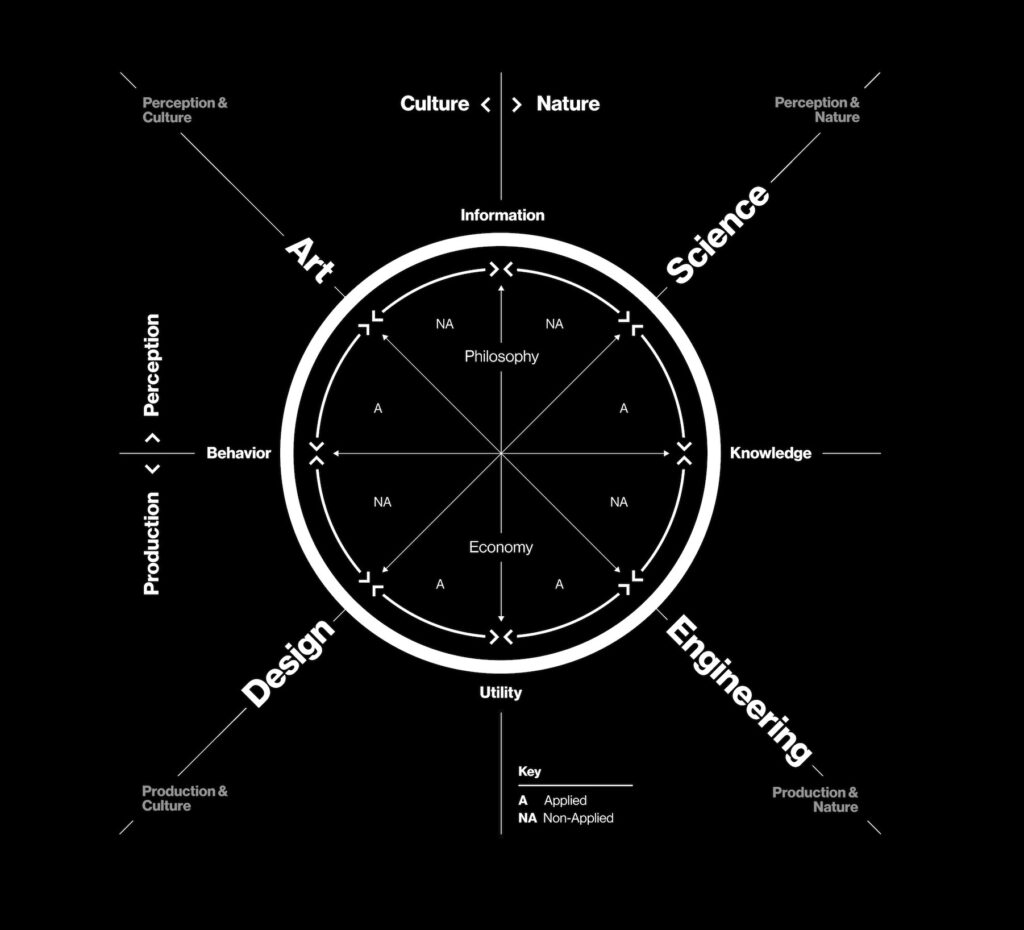 It shows how Science, Engineering, Design and Art are intertwinded, how the output of one fuels the input of the next leading to a cyclic process of creativity. Science offers new insights about the universe, which enables engineers to develop new technology. New technology leads to change of utility and new designs, new design changes cultural context and social behaviour, which leads to new cultural perceptions which fuels the creation of art. The “midnight stroke”, when Art meets Science, a miracle happens and the change of cultural perceptions leads to the rethinking of how we perceive reality and the universe which again brings new scientific realizations.

It shows us beautifully why all of these disciplines that we so much like to separate are deeply entangled and cannot be discussed on their own. The obsession with separation has brought humanity so many problems and it is still a barrier in our thinking that needs ultimately to be demolished.

The most important solutions for the problems we currently face will be found at the intersection of prior antithetic forces. It starts with our own perception of the use, obligations, practises and environments of art, science, engineering and design. We should stop to use labels or at least understand labels as something transient and fluid. This is not about diminishing the importance of expertise in one field but acknowledging that inspiration and skill for new ideas and methods can come from many sources, that collaboration helps from the harms of isolated thinking and venturing into the unknown might provide that spark one was searching for all along.

Audacity, collaboration, fluidity, openness and even paradox lies at the heart of innovation.